The “Road Scholar” program is best described as “an adventure in lifelong learning.”  People of all ages, from K-12 aged school kids to parents and senior citizens  – join the program from all over the world and make “road scholar expeditions” all around America, learning as they go. One month your find the Road Scholars digging on an archeological site, the next month they might be learning to forage for wild mushrooms or picking blueberries on a farm. Jeremy Jones is the director / coordinator for the group in our region through http://socc.edu

“Explore the World With Road Scholar

Road Scholar, the not-for-profit leader in educational travel since 1975, offers 5,500 educational tours in all 50 states and 150 countries. Alongside local and renowned experts, experience in-depth and behind-the-scenes learning opportunities, from cultural tours and study cruises to walking, biking and more.”

This week the Road Scholars paid a special visit to Hazen’s Riverside Blueberry Farm, where they were treated to an informal talk given by owner Wally Hazen about the history of the farm, including some interesting trivia on the roots of blueberry agriculture in southern Oregon in general, then they shared a picnic lunch and headed out to the berry fields to do some U-picking.

Our family mascot Cooper greeted the group, and all the kids fell in love with him right away. Cooper’s job is to “meet and greet” all of the visitors to the blueberry farm, and to be sure to show off his favorite tennis ball as well. He’s an important member of farm team, and arguably our most popular attraction, other than the great farm fresh berries. The group planned to take their fresh picked blueberries out to the kitchens of the well known Oregon Coast Culinary Institute in Coos Bay to make pies and jam, the perfect ending to a perfect day. We were pleased to have the Road Scholars as our guests today and look forward to many more fun visits from their “traveling learning consortium” in the future! 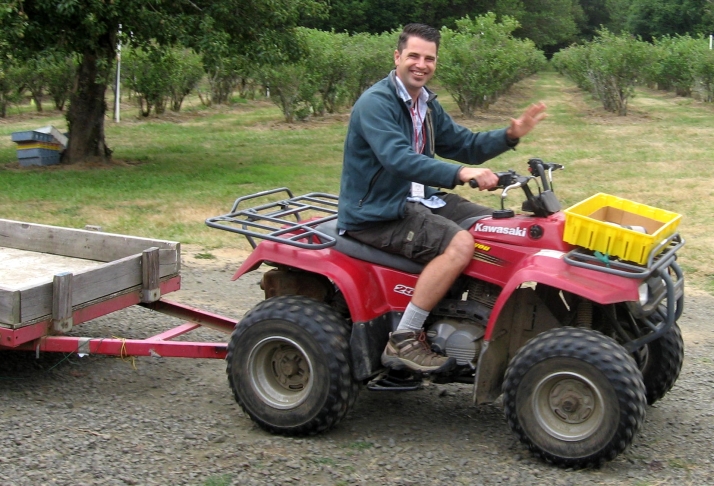 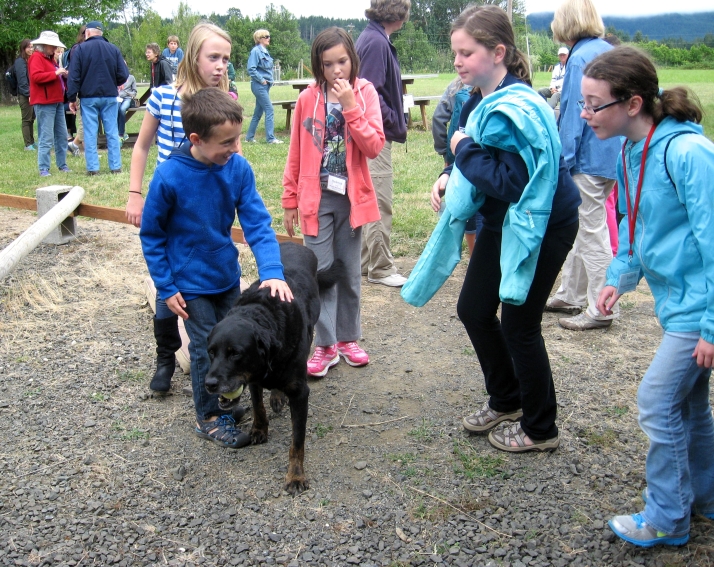 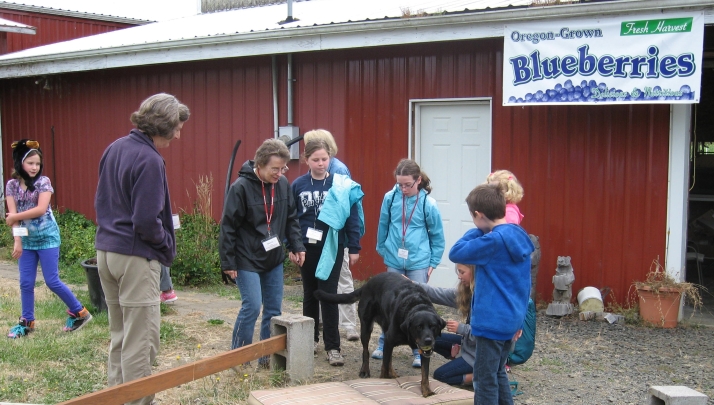 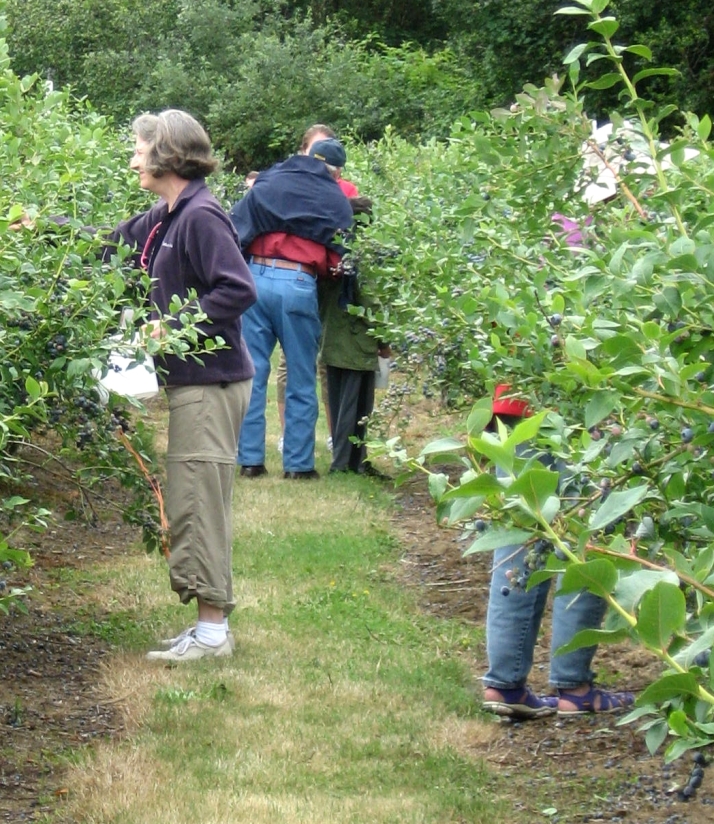 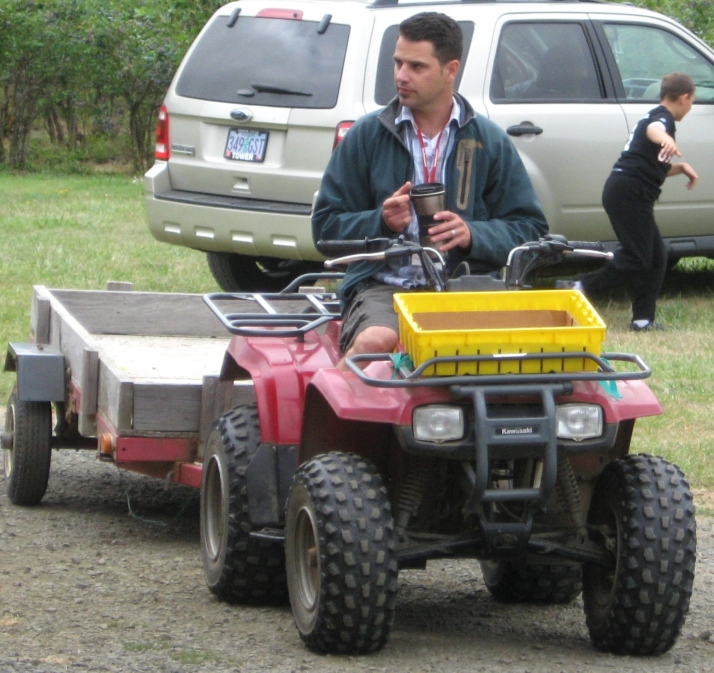 We’re pleased as blueberry punch to report that our own Wally Hazen and Hazen’s Riverside Blueberries U-Pick Farm was featured in an article in this morning’s edition of “The World” newspaper out of Coos Bay.

Here’s a re-post of the article:

By Thomas Moriarty, The World

FAIRVIEW — Beneath the glaring mid-day sun Wednesday afternoon, Wally Hazen watched as dozens of pickers wandered through rows of blueberries on his Coquille Valley farm.

“We’re running about 7,200 plants between both fields,” he said. Two nearby women dumped freshly-picked berries into already overflowing buckets.

The pickers at Hazen’s farm Wednesday weren’t employees. They’re his best customers. Eleven years ago, Hazen and his wife reinvented the farm as a retail business in the U-pick model, where customers are responsible for picking and transporting their own berries.

Hazen, who has operated grocery stores on the South Coast for years, said the idea began when the couple were looking for country property. They settled on a berry farm, located seven miles east of Coquille, near Fairview.

“The previous people weren’t marketing the berries,” Hazen said. “They were taking them to a processor in Salem.”

While the lower field is reserved for commercial sale production, U-pick customers are free to roam the upper fields and fill their buckets with all the berries they can use.

Mary Tschetter, one of the pickers at the farm Wednesday, said the she looks forward to the season as a way to stock up on fruit.

“I picked more than 100 pounds last year,” she said. “I freeze enough so I have enough for the whole year.”

Hazen said he and his wife have primarily selected blueberry varieties that make good eating and U-pick berries, rather than thick-skinned varieties often found on grocery store shelves.

Many of the their current plants have been on the property for years. “For the most part, berries are 28 to 30 years old — the bushes are,” he said. “My wife and I prune them each winter.”

While western Oregon is renowned for its Pinot noir grapes, the seasoned grocer said they aren’t the only fruit in the region gaining international acclaim

“We’ve got nine farms [in the region] now selling to South Korea,” he said.

Despite the distribution opportunities, the couple continues to concentrate on their U-pick business, which draws between 3,000 and 4,000 visitors each season.

“Some times I toy with the idea of making a bigger operation,” Hazen said. “Then I think, ‘Gah! I’m getting too old for this!’”

Reporter Thomas Moriarty can be reached at 541-269-1222, ext. 240, or by email at thomas.moriarty@theworldlink.com. Follow him on Twitter: @ThomasDMoriarty